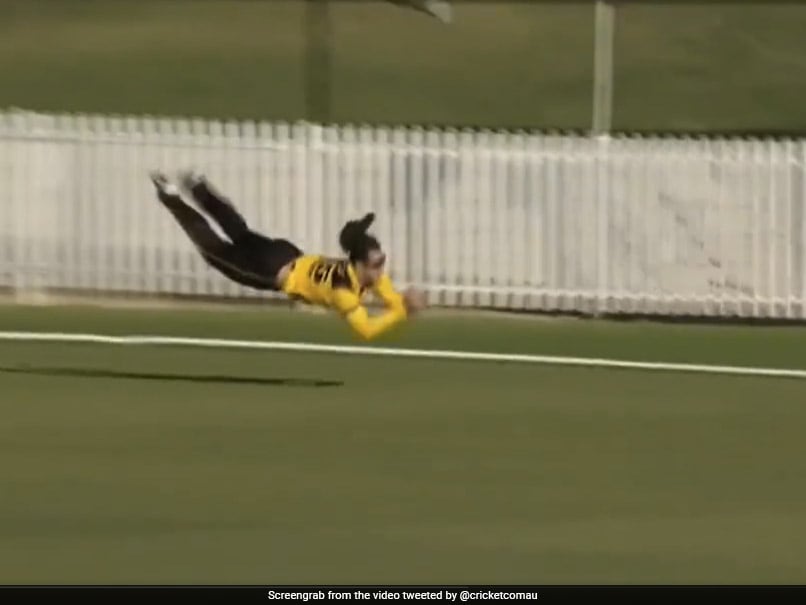 Hilton Cartwright took a brilliant catch in the outfield.© Twitter

Western Australia beat New South Wales by 18 runs in the final on Friday to win the Marsh Cup. Andrew Tye and Jhye Richardson were the standouts for Western Australia in the closely-fought final at the Junction Oval in Melbourne. But there was another game-changing moment in the match that in the end played a big part in how the match panned out. The moment of magic came in the 44th over of NSW’s chase, and the man in the middle of it all — Hilton Cartwright.

The Harare-born Australian cricketer turned the tide in Western Australia’s favour with an absolutely mind-boggling catch at the long-on boundary. New South Wales seemed well on track to overhaul the 226-run target with two set batters at the crease.

Moises Henriques had played a patient knock, anchoring the innings from one end while Ben Dwarshuis too was going strong from the other end. NSW needed just 22 runs off 36 balls with three wickets remaining, but it all changed thanks Cartwright’s exceptional effort in the field.

On the first ball of the 44th over, Henriques came to the track to D’Arcy Short and powerfully hit him towards down the ground. Cartwright sprinted a few metres to his left and out of nowhere dove full-length to grab the ball with both his hands. Both his feet were airborne at the time, and he landed with a thud, but still managed to hold onto the catch.

Catch of the summer?!

The commentators just couldn’t believe what they had witnessed.

“Oh my god! Look at that by Hilton Cartwright. Under pressure, horizontal. What a catch,” said one commentator.

“That is an incredible catch. One of the best catches you will see in the Marsh Cup,” said another.

The catch turned the match in Western Australia’s favour. NSW lost Adam Zampa in the next over while Tanveer Sangha was dismissed in the over after that as Western Australia bowled out NSW for 207 in 46.3 overs to win the final by 18 runs.